Four-and-half years since they originally agreed to merge with arch-rival Telecity, only to be jilted at the altar with the Equinix bid for Telecity in May 2015, Interxion appears to once again walking down the aisle with long-fancied suitor Digital Realty Trust (DRT).

Interxion shareholders are being offered .7067 DRT shares for each Interxion share, valuing Interxion at $93.48 per share or $8.4bn in total, an exit multiple of 23.3x the expected 2019 EBITDA.

Looking back at the original Telecity 2015 merger proposal, Interxion was then valued at USD$1.6bn and the combined company around GBP£3bn, with Interxion shares trading around the low $30’s after the announcement.

Equinix launched an 1145p per share offer for Telecity in May 2015, a couple of months after the Telecity/Interxion merger was announced, valuing Telecity at £2.4bn. (See https://www.colo-x.com/equinix-wade-telecityinterxion-merger-possible-offer-telecity/)

There were well-founded concerns at the time regarding the dominant position Equinix was going to have post the Telecity acquisition (see Colo-X analysis: https://www.colo-x.com/equinixtelecity-the-market-share-question/ ) and the transaction was referred to the European Commission. Clearance was duly provided in November 2015 with the proviso that eight sites were sold, including five in London. Ironically it was Digital Realty who acquired all of these.

Whilst the acquisition of the 8 sites from Equinix was a spring board for DRT’s move into the retail European colocation market, DRT was still a relatively small player in the retail part of the market as a whole, whilst being a leader in the wholesale sector.

Clearly this acquisition will change that from DRT’s perspective, though the combined group’s overall market share will not change that much, given the relatively small size of DRT’s existing retail focussed footprint.

The two jewels in Interxion’s crown will be the Frankfurt Hanauer Lanstrasse campus, now consisting of 13 data centre buildings and one of the two main network ecosystems in Frankfurt (the other being the Kleyer90 campus which is now part of Equinix since their 2013 acquisition of ancotel).

Elsewhere across Europe Interxion has strong market share in numerous so-called second tier locations such as Vienna or Copenhagen.

Interxion clients will benefit from a single provider of both retail and wholesale data centres solutions across the globe. Similarly, Interxion will expect to benefit from strong interest from DRT’s huge American presence, with America still representing 70% of DRT’s revenue and DRT’s US based clients now able to order from the same provider in both continents.

Impact on the London Colocation Market

In contrast to their position in the other 3 main European data centre markets, Amsterdam, Paris and Frankfurt, Interxion are a relatively small player in the London colocation market, with their 3 London data centres on Hanbury Street in the Brick Lane area offering only 90,000 square feet of net technical capacity or around 16MW of IT capacity, this against a London market of nearly 4 million square feet including both wholesale and retail capacity or about 2 million square feet for retail only. Thus Interxion whilst operating a well established ecosystem is a relatively tiny operator in London.

By contrast and especially since the acquisition of the five Equinix/Telecity disposals in London, DRT is quite a strong operator in London and the south east, with 9 facilities listed on the Colo-X UK data centre data base offering ½ million square feet of net technical capacity or nearly 75MW. These sites range from the tiny Bonnington House, on Dockland’s Millharbour (and soon to be significantly expanded by the opening of the 25,000 sq ft Cloud House) to the much larger 240,000 square feet wholesale focussed DRT Woking facility, sold on a wholesale basis to numerous large customers. DRT’s Sovereign House data centre is a key London network ecosystem. 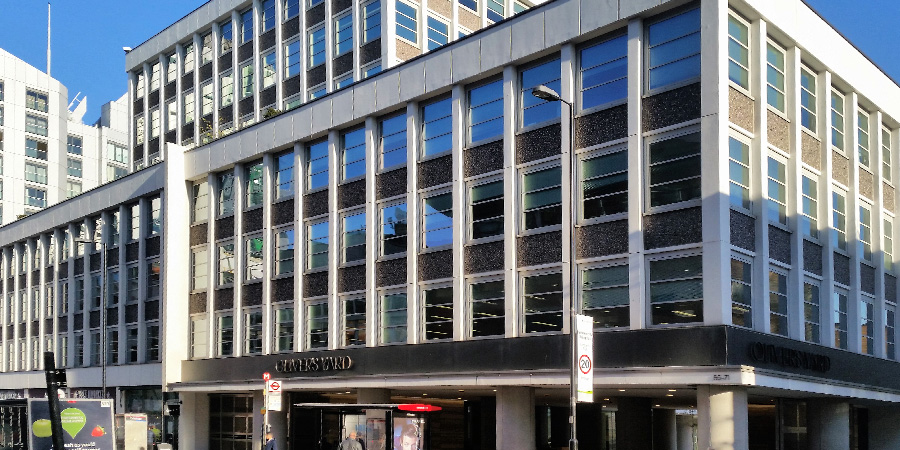 DRT’s Oliver’s Yard facility (shown above) is the closest to Interxion, so it will be interesting to see if it can somehow become a ‘campus’ play such as DRT have recently introduced to their four Docklands buildings (Meridian, Sovereign, Bonnington and Cloud House). With good availability in Oliver’s Yard access to the Interxion ecosystem will be a help in filling the existing capacity. The two locations are about 1km apart though potential fibre routes will be longer; however, the distances would suggest these would be similar to those connecting the four Docklands locations.

In terms of retail colocation buyers, as with the Equinix/Telecity merger, there will now be one less provider to consider going forward in the London market, but the impact is likely to be far less than the Equinix/Telecity deal where several strategic ecosystems such as LD8/HEX and MA1 Manchester were joined with the emerging Equinix Slough campus. According to our estimates Equinix were left with a dominant position in the UK retail colocation market which we estimated as much as 40% of the retail part of the UK data centre market.

The combined company will also offer significant opportunities for the Interxion London sales team. Whilst they have developed a well established London colocation ecosystem being a single site operator in London must have limited their capabilities.  Clearly having access to capacity in the DRT facilities at Heathrow, Redhill or Chessington, other locations where DRT are offering retail colocation will address this problem at a stroke.

Will the deal actually close this time?!

As we saw with the 2015 Telecity/Interxion merger, the deal isn’t closed until its closed! Whilst the combination of the two companies will result in synergistic cost savings that may not be available to other parties, data centre assets are attracting the interest of numerous infrastructure investors who are pushing valuations to new highs as they seek consistent revenue generating assets. It will be interesting to watch the Interxion share price over the coming weeks to see if a premium to the implied bid value appears.

My most recent updates on the London colocation market, together with some fun perspectives of the past 20 years can be found at https://www.colo-x.com/20-years-of-london-colocation/

Get a quick quotation

We usually supply costs and information within 60 minutes during office hours.

GET A QUOTE NOW

Request a quote or more information

Get the help of our consultancy

Gain specific insight into how our data centre consultancy services can help you.

We use cookies to give you the best experience on the Colo-X website. If you continue to use our site, we'll assume that you are happy with this.That's fineRead more